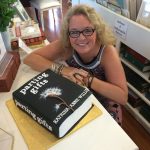 Katrina Anne Willis is the author of Parting Gifts (She Writes Press, April 2016) and a faculty member of the Story Summit Writer’s School. Her personal essays have been featured in numerous anthologies, including Chicken Soup for the Soul: Think Possible, My Other Ex: Women’s True Stories of Leaving and Losing Friends, and Nothing but the Truth So Help Me God. She was recognized as one of six distinguished authors at the 2016 Indianapolis Book & Author luncheon, was named a BlogHer 2015: Experts Among Us “Voice of the Year,” was awarded the 2014 Parenting Media Association’s Gold Medal Blogger Award, participated in the 2013 “Listen to Your Mother” show, and was a 2011 Midwest Writers Fellow.